She earned a Doctoral Thesis in Biology, a PhD in Molecular and cellular biology, and Professional certification as Biologist. During her university degree and afterwards, she was visiting scientist at the Max Planck Institute, Berlin. She dedicated most of her research activity in industry. She was scientist at ENI-Research (1990-1996) conducting research in the biotechnology field, applied to the optimization of pharmacologically active proteins by molecular engineering and structural proteomics approaches. Then, she was Project Leader and Head of microarray Unit at Novartis Vaccines & Diagnostics (2004-2008), and at Chiron Vaccines (1996-2004) (Siena, Italy), leading research on the identification of vaccine candidates against different bacterial pathogens. Her major activity was dedicated to the identification and characterization of vaccine candidates against Chlamydia trachomatis. She also contributed to the Group A and Group B Streptococcus, and Group B Neisseria meningitidis vaccine projects. Afterwards (2008–2016) she was Research Director at Externautics SpA (Siena, Italy), a biotech company focused on the development of novel cancer markers and therapeutic targets, as well as in the generation and preclinical development of marker-specific mAbs with diagnostic or therapeutic properties. The most relevant outcome of this period was the identification and validation of two potential targets for colon, breast and ovary cancer, and related monoclonal antibodies with anti-tumor activity. In June 2016 she joined the National Institute of Molecular Genetics (Milan, Italy) as Head of Translational Research and in 2018 she was appointed Chief Scientific Officer and General Director of CheckmAb. She focuses her activity on projects at high translational value, with the intent to push them towards preclinical development phases. She is deeply involved in the identification and validation of novel markers for cancer and autoimmune diseases, as well as novel potential targets for immunotherapy. 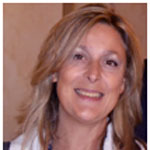